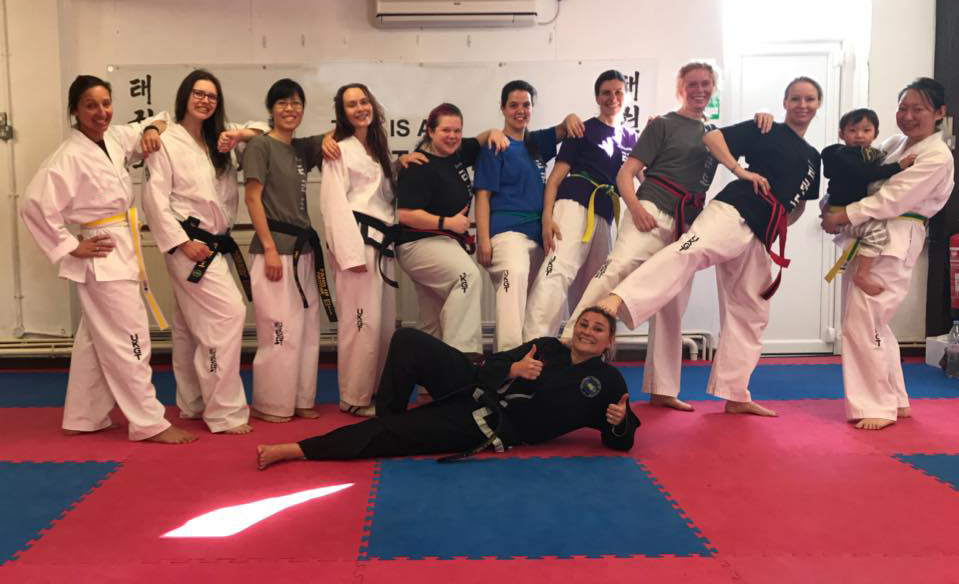 It is International Women’s Day on March the 8th. Since 1911, this has been a day to mark women’s achievements and to lobby for and raise awareness of inequality for woman around the world.

The year’s theme struck a chord with me: it is Choose to Challenge.

Like many women who come to martial arts as an adult, my taekwon-do journey has been a series of choices to challenge myself.  From being brave enough in my 40s to step onto the mats for the first time and making it through my month’s trial with legs so stiff I could hardly get into my car.

Then taking part in my first competition as a yellow tag  –  I had to spar a tall black tag 25 years younger than me and spent most of the time lying on the mats. The challenge there was not to give up and leave before the end of the competition.  And the next challenge was going back and doing more and bigger competitions after that first experience. Sparring in general was a huge challenge for me, to accept that, as a middle aged woman, I was going to get hit. It took a lot for me to stand my ground; I wore a moulded chest protector for a while in a very Xena Warrior Princess type of way much to Mr Miles’ amusement. Then there was the challenge of controlling my adult nerves at gradings. And then of teaching classes on my own as a first degree. 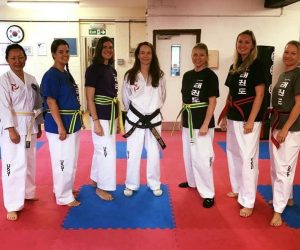 Teaching an amazing group of women as a 2nd degree

I had foot surgery at one point where a staple and pin were put in my foot.  It was a tough challenge getting back to training after a few months of not being able to walk. In the grand scheme of things these are minor accomplishments but I really believe that challenging myself in taekwon-do has changed me in lots of positive ways.  And from what people have said to me over the years, I think I have in my own small way managed to inspire or encourage women that that I have trained with or taught.

Out there in the real world, there have always been truly great women who have faced great challenges, in many cases literally fighting for what they believed in.  So on International Women’s Day 2021, I would like to mention just a few women who have a place in the history of the fighting arts.

There was Queen Boudica of the Iceni who challenged the Romans alongside her daughters, taking poison at the end of her final battle rather than be captured and killed.

There was Eleanor of Aquitaine (1122–1204) who was one of the wealthiest and most powerful women in western Europe during the Middle Ages. She led armies and was a leader of the Second Crusade.

There was Fang Qiniang who lived in Fujian Province on the eastern coast of China in the late 1600s/early 1700s. If you read about the history of gongfu (and any martial art really), the leading characters are usually male. But Fang was one of the few female martial arts pioneers that I have come across. The story I have read is that she wanted to avenge her father’s death but did not have the fighting skills she needed. She had been a disciple of her father in the art of monk fist gongfu but had not mastered it.  Then one day she observed the way that the cranes moved, realised the importance of hardness but also of softness and went on to become a master of what became known as Yongchun White Crane Boxing. In a roundabout way, she played a part in the history of taekwon-do as I believe that knowledge of White Crane boxing travelled to Okinawa and influenced the development of karate, which in turn lead to taekwon-do.

And then there was the amazing Edith Garrud, born in Somerset in 1872. In her late 20s she began learning jujitsu and went on to teach it and other fighting skills to other women and most notably to a group of Suffragettes.  There were a number of hand to hand skirmishes between the Suffragettes that Edith trained and the police, the most famous being the Battle of Glasgow and the raid on Buckingham Place in 1914.  She is definitely worth reading about!

There were the incredibly brave women of the British Government’s Special Operations Executive in the 1940s, who trained in the same silent killing methods as their male colleagues and were parachuted into Nazi occupied France to work with the resistance. Many did not survive the war. 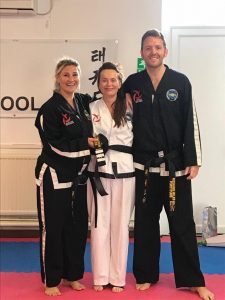 And what about more modern times? Martial arts really took off in the UK in the 1970s and 80s. First Grand Master Rhee Ki Ha had brought ITF taekwon-do to the UK in 1967. Bruce Lee’s Enter the Dragon came out on 1973. David Carradine’s peace-loving shaolin monk travelled across America in the hugely successful King Fu series. In the 1980s, Hollywood gave us the first of the Karate Kid movies and millions of people around the world started wiping on and off. And in the 1970 and 1980s, judoka and all round athlete Brian Jacks was a household name: an olympian and a TV Superstar in the BBC programme.   I was a tomboy in the 1970s.  I had an action man and his tank.  I loved the Bionic Woman, Wonder Woman and did Grass Hopper impressions with ping pong balls. I loved maths and science. In the 1990s I watched Lucy Lawless as Xena Warrior Princess. And I now know that Buffy the Vampire Slayer (aka Sarah Michelle Gellar) who I watched religiously in the late 90s/early 2000s had a black belt in taekwon-do.  But it did not occur to me until many years later that I could do what these women did.  I think it is safe to say that there were more boys and men practicing karate chops in their bedrooms and gardens than girls in the 1970s and 80s and that there was a lot of machismo in the martial arts in the UK at that time.  But there were some women training then; one of the female pioneers of taekwon-do in the UK was Grand Master Sheena Sutherland who sadly died in 2019.  She started training in 1974 and became the second female worldwide to be honoured as a Taekwon-do 9th Degree Grand Master.

More recently, Kubra Dagli from Turkey was 21 when she won gold at the World Taekwon-do (WTF) world championships in 2016. Her victory attracted a lot of press coverage. Not for her sporting ability but because she competed in a hijab, which sparked debate around the world and further challenged female stereotypes.

And a woman who has brought female power breaking to the attention of the  public is Guinness World Record holder Master Lisa Pitman.  She runs her own taekwon-do school in to the South East of London and is a fantastic female role model.

In his Encyclopaedia of Taekwon-Do General Choi wrote specifically about the benefits of taekwon-do for women.  He believed that taekwon-do could be practiced by and have great benefits, both physical and mental, for people young and old, male and female. I have read online that almost half of the people who practice taekwon-do in its many forms around the world today are female. That feels about right.  At Miles Martial Arts  we are definitely an equal opportunity school although of course, if the men work really hard, then maybe one day they maybe able to kick like a girl 🙂

If you think martial arts might be for you, why not Choose to Challenge yourself and step onto the mats?   Or encourage your daughter to try it. It would be great to see you at the Dojang.

It’s not all serious – we do have fun too!